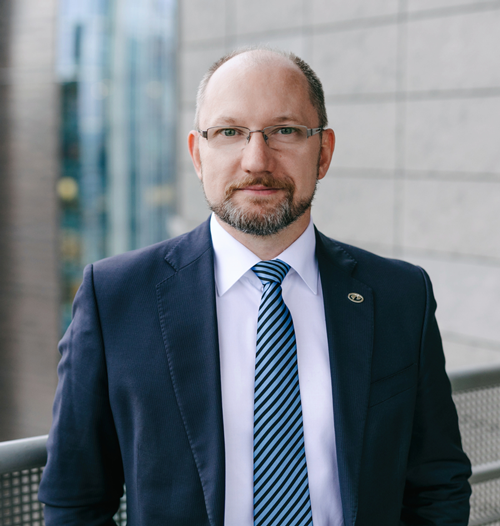 I was born in Vilnius in 1976. In 1994, I finished Vilnius Secondary School No 27 (named after Jonas Basanavičius). The same year, I entered Vilnius University where I defended theses for a Bachelor’s Degree (1998) and a Master’s Degree (2000) in Accounting and Auditing.

My employment began during the study years when I worked as an accountant and assistant auditor. In 1999, I embarked on my career in the insurance sector.

After joining the team of Aviva Lietuva UAGDPB in 2001, I performed the duties of the Chief Financial Officer and Manager for Business Development, and for three years worked in the sales area where I held the duties of Sales Director and member of the Board for one year. I am particularly pleased with the project I happened to manage, i.e. organising the launch of the 2nd tier pension funds.

In 2009-2016, I worked at the non-life insurance company Gjensidige Baltic. Until 2013, I was Chief Executive Officer of the Lithuanian branch, and from March 2013 to September 2016 my responsibilities included product development, pricing and insurance risk assessment at the level of all Baltic countries.

In 2017, I organised several businesses.

At present, I am an independent member of the Boards of the state-run companies Smiltynės Perkėla AB and Vilniaus Metrologijos Centras AB, and a member of the Lithuanian Millennium Rotary Club.

I joined the team of Investicijų ir Verslo Garantijos UAB (INVEGA) in February 2018.

I am married. With my wife Edita we have three daughters.

My life motto is “Always ask yourself if you can do your work even better”.